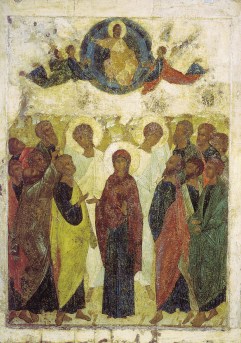 There are holy days in the Church that we always make sure to celebrate on the day itself. Who among us would go to an Ash Wednesday service on a Tuesday morning, or a Maundy Thursday service on Good Friday? There are other feasts that are easy enough to observe precisely because they always fall on a Sunday: Easter and Christ the King spring to mind. And there’s one feast that we mark the night before: in most American congregations, Christmas Eve has become the principle service of Christmas, and few parishes assemble on December 25th.

There exist, though, some feasts that are important to the life of the Church but which are rarely observed on their proper day. Epiphany (the Sixth of January) rarely falls on a Sunday;  Reformation Day (the Thirty-first of October) and All Saints’ (the First of November) face a similar problem.* When these feasts fall on a weekday, they are often observed the following Sunday.

Then there’s the Ascension. Following Saint Luke’s dating in the Acts of the Apostles, it falls forty days after Easter Sunday. Like the observances in Holy Week, the Ascension is pegged to a specific day of the week: it always falls on a Thursday. As with Epiphany, the Reformation, and All Saints’, and unlike the observances of Holy Week, the Ascension is almost always celebrated the following Sunday. In his brief commentary on Acts: 1-11, New Testament scholar Brian Peterson writes:

The Ascension seems like the poor cousin among church festivals: often overlooked, passed over without being missed.

A few congregations will worship on the Thursday that comes 40 days after Easter. More congregations will observe the Ascension on the following Sunday, thus bumping the seventh Sunday of Easter from the calendar. Most, I suspect, will simply not observe it at all.

This seems like poor treatment for one of the great ecumenical feasts, and an event that the writer of Luke-Acts thought important enough to narrate twice. Perhaps the scene of Jesus ascending on a cloud is a bit too reminiscent of Peter Pan. Perhaps we just can’t tolerate too much worship spilling into the week. More likely, I suspect, we really don’t like good-byes, and we don’t know quite how to celebrate this one.

As Dr. Peterson, who is also a Lutheran pastor, points out, transferring feasts is not a great system because something always gets the boot to make room. The texts for Easter 7B are great. St. John’s Gospel continues to work through Jesus’ discourse at the Last Supper in a way that builds both on the previous two weeks while also indirectly addressing the Ascension:

And now I am no longer in the world, but they are in the world, and I am coming to you. Holy Father, protect them in your name that you have given me, so that they may be one, as we are one.

And the reading from Acts picks up almost exactly where the Ascension text leaves off, as the Apostles elect Matthias to replace Judas, as the Twelve pray for guidance in what might be the first call committee meeting in Church history. The Spirit is at work guiding the Church after the Ascension but before Pentecost. That’s kind of an important detail to leave out.

But there are compelling reasons to transfer the feast as well. Week after week, we relive the story of God’s miraculous and salvific work in the world; one of the ways in which we do this is through re-telling, in a sort of serialized form, the narrative that unfolds in Sacred Scripture. In Easter, we hear about the events after Christ’s Resurrection and ponder what it means for us to live into this new life. The Ascension is a key part of this arc, and it’s important for the Church — the entire Church, not just those who show up in the middle of the week — to bear witness to this episode.

There is a third option, one which I am shocked that anyone actually espouses: to skip the feast outright. The Rev. Scott Gunn, an Episcopal priest whom I greatly admire, writes:

If your congregation chooses not to celebrate all the Principal Feasts, so be it. Simply skip the Feast….

Rev. Gunn is writing about the Epiphany, but the point is easily transferred to the Ascension. While he would prefer these feasts be observed on their assigned day, he holds that it is preferable to neglect the feast entirely than to move it. For my own part, I simply cannot comprehend the idea that moving a feast does more harm than ignoring the narrative arc. I appreciate Rev. Gunn’s concern about the common prayer of the Church, but I find his solution untenable precisely because these common feasts are so essential to the story we’re reliving.

We’re caught between two imperfect-but-important options, one full of liturgical concern and the other a matter of pastoral sensibility. Do we observe the feast on the given day, knowing that fewer people will show up? Or do we wait until Sunday, neglecting Easter 7, and fall out of sync with the calendar of the Church catholic?

My preference as a liturgist and a high church Lutheran is to mark the observance on fortieth day after Easter, even though that is always a Thursday. My preference as a pastor is that my parishioners hear the basis for the Creed, that Christ “ascended into heaven and is seated at the right hand of the Father.”

I write this on the Feast of the Ascension itself, wishing that we were gathering today to proclaim that the Risen Christ has been exalted. And on Sunday, we will do just that. Even so, I pray for a time when the cycles of Scripture reflected in the liturgical calendar guide and shape our lives rather than our lives guiding the cycles of Scripture.

*The Transfiguration (the Sixth of August in the Anglican and Catholic calendars) would face this issue as well, but the Anglican and Roman traditions are more inclined to move a feast off of a Sunday rather than onto a Sunday. How this plays out on the parish level is a different matter.

2 thoughts on “Feast of the Ascension: The Tension of Mid-Week Liturgies”