Skip to content
A Pilgrim in Augsburg Sermons April 20, 2019 5 Minutes

A Homily for Good Friday 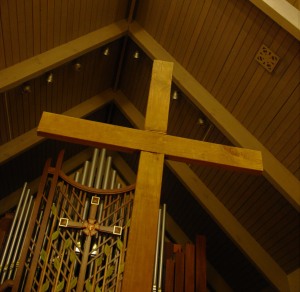 Grace to you and peace from God our Heavenly Father and Christ Jesus Our Lord, the crucified one. Amen.

It’s all gone wrong, hasn’t it?

Somewhere over the course of the week, things have undeniably gone astray.

Sunday, we were cheering a triumphant Christ, and today, we’re mourning a man lynched by an angry mob with the blessing of a brutal empire. Even by the end of worship last week, the shouts of, “Hosanna!” and, “Blessed is he who comes in the name of the Lord!” faded away and the words “Crucify him!” echoed deep in our hearts.

Sunday’s palms are already to turning to ash.

Things certainly started out on a promising note. A protest, rich in messianic imagery, carved its way through the City of David. The King, it seemed, had returned at last. And as the Passover approached, expectation was high that God would once again deliver captive Israel.

The entire Gospel – No! The entire covenant! No! All of history! – had been leading up to this week – so much so that St. John devotes nearly half of his Gospel to the events in Jerusalem.

Everything came crashing down.

After the triumphal entry, the clashes began almost immediately: Jesus entered the Temple and started flipping over the money changers’ tables. He spent days arguing with the religious leaders. By Wednesday, one of his own disciples was conspiring to have him arrested. Last night, after dinner, he was arrested and hauled before the Roman governor.

And now there’s no turning back.

The one who healed the sick and even raised the dead now lies in a tomb. The Rabbi, our Teacher, now suffers a fool’s fate. The one who came to fulfill the Law has been executed as a criminal.

Make no mistake. While we like to talk about the glory of Christ’s Passion and death, this was not a death valued by any one. We venerate the Cross, but to those who frequently saw crucified bandits littering the highway, they knew exactly what the Cross represented: oppression, violence, humiliation, and shame. To be hung on a cross was not a noble, good, or beautiful death, if there can ever be such a thing. To the Jewish people, anyone who died in such a manner, hanging from a tree, was under God’s curse. It was a death carried out not according to the Law of Moses but the tyranny of Caesar and his governor. It wasn’t the death of a good man – one earned in old age. It wasn’t a death for a greater cause. No, this is the death of a heretic, one who had blasphemed the one true God, deserving of such a curse.

For the Romans, crucifixion was the death of a traitor, a rebel – a death deemed too barbaric for a citizen of the Empire. The cross was designed for one purpose: to make an excruciating and humiliating example of any conquered person who claimed the divine imperial authority reserved for the Caesars. Why else would Pilate be so interested in Christ’s kingship? Or the Jewish leaders so quick to affirm Caesar’s lordship over them?

Here, Pilate’s hubris is on full display. How arrogant he must be to think that he could wash his hands of this horrific scene. No, he’s playing a sadistic game, egging on the religious leaders, daring them to take the law into their own hands or to claim a lord other than Caesar. Either way, they risk a violent crackdown, with scores more nailed up on crosses. Pilate takes a sick and demented pleasure in tearing them down to his level of cruelty.

No wonder so many of the disciples fled, that far fewer people followed Jesus to Golgotha than followed him with palms into Jerusalem. What’s more remarkable isn’t that so many fled, but that the women remained until the end, all the way to the tomb.

This we call “Good”? Today is a good day? The story that leads up to this is called “good” news? It’s doubtful that any of the witnesses would have agreed. No, “Good” is an outdated, archaic word for “Holy” – as in, the Friday of Holy Week. The German title is much more fitting: “Sorrowful” Friday.

It is difficult to find what is particularly “good” about the Passion. What glory is there in such a horrendous event? Theologians have spent centuries trying to wrap their heads around the Crucifixion and the work that Christ does on the Cross. They’ve shed oceans of ink and written libraries upon libraries, and yet this important conversation has yielded as many new questions as it has answers.

Today, we see our Lord, God-with-us, the Incarnate One, hung upon the Cross. Today is a day of tears, not of joy. Our Lord’s Passion forces us to confront a painful truth:

But for today, caught up in the middle of this story, feeling the profound weight of the Cross, in our grief, if there is any goodness to be found, it’s this: God understands. Our Heavenly Father has mourned the loss of the Only-Begotten Son. Christ, the Eternal Word, true God from true God, has felt our pain, known our anguish. God has felt grief and agony. Jesus of Nazareth has felt the abandonment of his friends as the men have run scared and the women stand close by but unable to help. The Son of Mary has felt concern for his mother as she sees her son hanging.

To be certain, even in in his Passion, we catch glimpses of Christ’s divine identity. At his arrest, he utters the divine name revealed in Exodus: I AM WHO I AM. It is the name he has claimed throughout his ministry: I Am the Bread of Life; I Am the Gate; I Am the Good Shepherd; ; I Am the Resurrection and the Life; I Am the Way, the Truth, and the Life; I Am the True Vine. I Am He. He wields such power that even speaking this title knocks down those who came to arrest him.

But it is in his death that we see Christ at his most fragile, and consequently, his most human. Today, God looks the most like us. The person we see crucified seems very far removed from the Transfigured Lord, the revealed Son of God we met before the beginning of Lent. Instead, we see a human, Jesus of Nazareth, in all of his earthly frailty. The Divine Healer hangs, broken. The One who brings living water is thirsty. The Only Begotten Son of the Father expresses concern for his Blessed Mother.  The One through whom all things were made is, on the Cross, unmade. The One who is the Resurrection and the Life tastes death.

And it is in this humanity that we find goodness. It is in his death that the full weight of the Incarnation comes to bear. God became human not just in form, but in very essence, sharing even in the most horrible parts of our being. It’s precisely this humanity that makes the story so vital. God became incarnate in the very fullest sense, living but also dying. In his death, Jesus, the embodied Son of God, shows the fullness of his humanity. In Christ’s death, we see just what it means that God became human – we see the extreme depth of that love. Today, we worship a God who intimately knows our every pain.

In Christ, God joins humanity, even in the tomb.