Skip to content
A Pilgrim in Augsburg Sermons November 5, 2019 5 Minutes

A Homily for All Saints’ Day

Grace to you and peace from God our Heavenly Father and Christ Jesus our Lord, who has united the saints throughout the ages into the Kingdom of God. Amen.

There’s a musical meme, a centuries-old piece of liturgical hymnody used by composers throughout numerous symphonies and film scores to add an air of foreboding. You’ve heard it, even if you don’t realize it.

It’s popped up in The Shining, Star Wars, and The Lion King. It’s the funeral chant Dies Irae, part of the medieval Requiem Mass for the dead. If you’ve ever heard Mozart’s setting of the Requiem, his take is especially dramatic, full of fury.

But what more could we expect from a poem whose name literally means “Day of Wrath?” This is how culture typically pictures the Apocalypse, full of flames and ire: “The day of wrath, that day will dissolve the world in ashes….”

Today, we read another apocalyptic scene, this one from the prophet Daniel – or at least, we heard the introduction and conclusion. The vision itself is full of wild, animal-like creatures emerging from the sea, including a bear with three tusks who is ordered to “Arise, devour many bodies,” and a ten-horned beast “terrifying and dreadful and exceedingly strong. It had great iron teeth and was devouring, breaking into pieces, and stamping what was left with its feet.”

Daniel’s vision is an image better-suited for the American version of Halloween than the Church’s twin feasts of All Saints’ and All Souls’.

But then, amidst the horrifying scene unfolding, the Ancient One arrives and takes his fiery throne, with his clothing “white as snow, and the hair of his head like pure wool,” as a heavenly court of “a thousand thousand served him and ten thousand times ten thousand…attend[ed] him.” This Ancient One banishes those dreadful beasts, and then suddenly arrives “one like a son of man” descending from on high and riding on the clouds. This person is “given dominion and glory and kingship, that all peoples, nations, and languages should serve him. His dominion is an everlasting dominion that shall not pass away, and his kingship is one that shall never be destroyed.”

Our cultural understanding of the end times focuses on those fantastical beasts and great battles, but we neglect that wondrous end when the Ancient One and the Son of Man sit enthroned. We forget that the word apocalypse literally means “revelation,” that these apocalyptic passages reveal the coming of the Triune God, the Righteous and Merciful Ruler of All Things. Even that fiery hymn “Day of Wrath” reminds us that Christ, the Judge, is also the gracious savior who came to redeem us from sin and death, and it ends with a remembrance of God’s mercy:

“Merciful Lord Jesus / Grant them rest.” It’s a reminder to those sitting in sorrow at the funeral that Christ has rescued us from the finality of death, that death is but a short pause, a passing breath. The horrifying images of doomsday end not with murderous beasts nor with death but with Christ enthroned at the right hand of the Father, ushering in the Kingdom where divine blessing is poured out and the Beatitudes are fulfilled.

This coming Kingdom is the inheritance Saint Paul tells us we have obtained in Christ. It is in this new realm where our weeping will turn to laughing as we are re-united with all the saints who have gone before us. It is in this new Kingdom where those who were hated, excluded, and reviled for Christ’s sake will rejoice and receive their reward, and in this Kingdom Christ will also give to the greedy, the gluttonous, and the corrupt their just desserts as well. In this new Kingdom, love for God, neighbor, and even enemy will be the Law inscribed on our hearts.

On that day, in that dominion, God’s merciful justice shall reign, and all things will be placed under Christ’s feet. This new Kingdom, already erupting forth into this world, shall never pass away. Though death may haunt us a little while longer, we know that we shall rise to live in the Kingdom of God forever and ever.

And you, dear Church, are already being caught up into this coming Kingdom. For surely when you were baptized, when you were brought into the great company of saints, you were made a member of the Body of Christ, dying with him the only death that matters and rising unto everlasting life. You have been given new life with the saints and, like the faithful who have gone before, were made an in-breaking of this Kingdom. Though the earth may shake and deathly beasts may rage, though the world may dissolve into ash, the Kingdom will endure.

And in the dismal chaos of this world, as the days grow shorter and the nights longer, as all of creation falls asleep for a time and the cold winds blow, as we mourn our loved ones who have died, Christ comes to us at the altar, nourishing us with the grace and strength to endure. This Sacrament is a little apocalypse, a weekly revelation of the coming Kingdom. In this sacred meal, we receive a foretaste of our union with the saints, for were we make our communion with them as we are consumed into the Body of Christ. 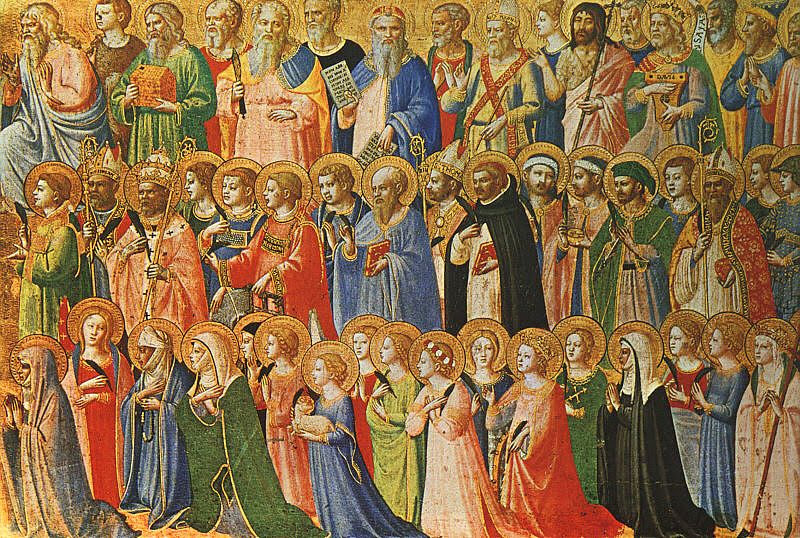 Here at this table is the Body of Christ, the communion of saints, bread for the hungry, and blessing for those who weep. Here we join with Anne and Bill and Doug and Bo and Terry, with Martha and Lorene, with all three of those heroic saints Martin, with John and Charles Wesley, with Teresa and Catherine, with Augustine and Chrysostom and Justin, with Peter and Paul and Mary, with the Blessed Virgin and her holy husband, with David and Moses and Miriam, with Sarah and Abraham, and all the faithful throughout the ages.

But kindred, you have been caught up into this revelation. You are among the faithful chosen and called by God. You are also now Christ’s hands to feed the hungry, Christ’s mouth to speak words of comfort to those who mourn. You are now among the saints sent to bear witness to the world, to continue the mission given to our ancestors.

Here in these pews is the Body of Christ, the communion of saints, bread for the hungry, and blessing for those who weep.

One thought on “For All the Saints”